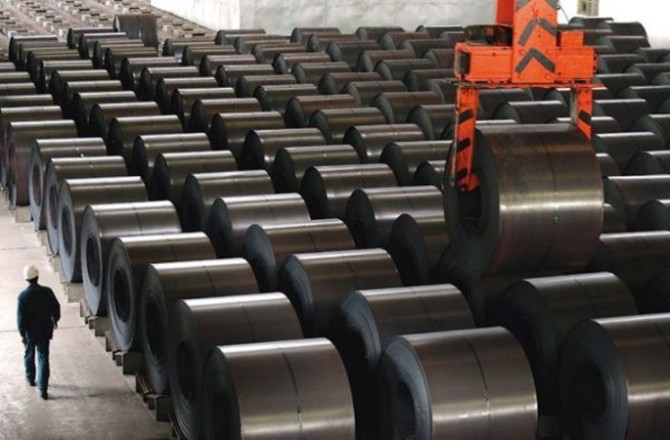 What is GP Steel?

Hot-dip galvanizing is a form of galvanization. It is the process of coating iron, steel, or aluminum with a thin zinc layer, by passing the metal through a molten bath of zinc at a temperature of around 860 °F (460 °C). When exposed to the atmosphere, the pure zinc (Zn) reacts with oxygen (O2) to form zinc oxide (ZnO), which further reacts with carbon dioxide (CO2) to form zinc carbonate (ZnCO3), a usually dull grey, fairly strong material that stops further corrosion in many circumstances, protecting the steel below from the elements. Galvanized steel is widely used in applications where rust resistance is needed, and can be identified by the crystallization patterning on the surface (often called a “spangle”).

The process of hot-dip galvanizing results in a metallurgical bond between zinc and steel with a series of distinct iron-zinc alloys. The resulting coated steel can be used in much the same way as uncoated. Galvanized steel can be welded; however, one must exercise caution around the resulting zinc fumes. Galvanized steel is suitable for high-temperature applications of up to 392°F (200°C). The use of galvanized steel at temperatures above this will result in peeling of the zinc at the intermetallic layer. Electrogalvanized sheet steel is often used in automotive manufacturing to enhance the corrosion performance of exterior body panels, this is however a completely different process.
Lead is often added to the molten zinc bath to improve the fluidity of the bath (thus limiting excess zinc on the dipped product by improved drainage properties), helps prevent floating dross, makes dross recycling easier and protects the kettle from uneven heat distribution from the burners.[1] Lead is either added to primary Z1 Grade Zinc or already contained in used secondary zinc. A third, declining method is to use low Z5 Grade Zinc.[2]
Steel strip can be hot-dip galvanized in a continuous line. Hot-dip galvanized steel strip (also sometimes loosely referred to as galvanized iron) is extensively used for applications requiring the strength of steel combined with the resistance to corrosion of zinc. Applications include: roofing and walling, safety barriers, handrails, consumer appliances and automotive body parts. One common use is in metal pails. Galvanised steel is also used in most heating and cooling duct systems in buildings
Individual metal articles, such as steel girders or wrought iron gates, can be hot-dip galvanized by a process called batch galvanizing. Other modern techniques have largely replaced hot-dip for these sorts of roles. This includes electrogalvanizing, which deposits the layer of zinc from an aqueous electrolyte by electroplating, forming a thinner and much stronger bond.

Corrugated galvanised iron (colloquially corrugated iron or pailing (in Caribbean English), commonly abbreviated CGI) is a building material composed of sheets of hot-dip galvanised mild steel, cold-rolled to produce a linear corrugated pattern in them. The corrugations increase the bending strength of the sheet in the direction perpendicular to the corrugations, but not parallel to them. Normally each sheet is manufactured longer in its strong direction.
CGI is lightweight and easily transported. It was and still is widely used especially in rural and military buildings such as sheds and water tanks. Its unique properties were used in the development of countries like Australia from the 1840s, and it is still helping developing countries today.

CGI was invented in the 1820s in Britain by Henry Palmer, architect and engineer to the London Dock Company. It was originally made (as the name suggests) from wrought iron. It proved to be light, strong, corrosion-resistant, and easily transported, and particularly lent itself to prefabricated structures and improvisation by semi-skilled workers. It soon became a common construction material in rural areas in the United States, Chile, New Zealand and Australia and later India, and in Australia and Chile also became (and remains) the most common roofing material even in urban areas. In Australia and New Zealand particularly it has become part of the cultural identity,[1][2][3] and fashionable architectural use has become common.[4]
For roofing purposes, the sheets are laid somewhat like tiles, with a lateral overlap of two or three corrugations, and a vertical overlap of about 150 mm, to provide for waterproofing. CGI is also a common construction material for industrial buildings throughout the world.
Wrought iron CGI was gradually replaced by mild steel from around the 1890s, and iron CGI is no longer obtainable – however, the common name has not been changed. Galvanized sheets with simple corrugations are also being gradually displaced by 55% Al-Zn coated steel[5] or coil-painted sheets with complex profiles. However CGI remains common.

Today the corrugation process is carried out using the process of “Roll Forming”. This modern process is highly automated to achieve high productivity and low costs associated with labour. In the corrugation process sheet metal is pulled off huge rolls and through rolling dies that form the corrugation. After the sheet metal passes through the rollers it is automatically sheared off at a desired length. The standard shape of corrugated material is the round wavy style, but can be easily modified to a variety of shapes and sizes by simply changing the dies [4].
Many materials today undergo the corrugation process. The most common materials are ferrous alloys but may also span to stainless steels. Copper and aluminium are also used. Regular ferrous alloys are the most common due to price and availability. Common sizes of corrugated material can range from a very thin 30 gauge (.012 inches = 0.305 mm) to a relatively thick 6 gauge (.1943 inches = 4.94 mm). Thicker or thinner gauges may also be produced.
Other materials such as plastic and fibreglass are also given the corrugated look. Many applications are available for these products including using them with metal sheets to allow light to penetrate below. However, these sheets are not formed through the corrugation process.

The corrugations are described in terms of pitch (the distance between two crests) and depth (the height from the top of a crest to the bottom of a trough). It is important for the pitch and depth to be quite uniform, in order for the sheets to be easily stackable for transport, and to overlap neatly when making a join. Pitches have ranged from 25 mm (1 inch) to 125 mm (5 inches). It was once common for CGI used for vertical walls to have a shorter pitch and depth than roofing CGI. This shorter pitched material was sometimes called “rippled” instead of “corrugated”. However nowadays, nearly all CGI produced has the same pitch of 3 inches (76 mm).